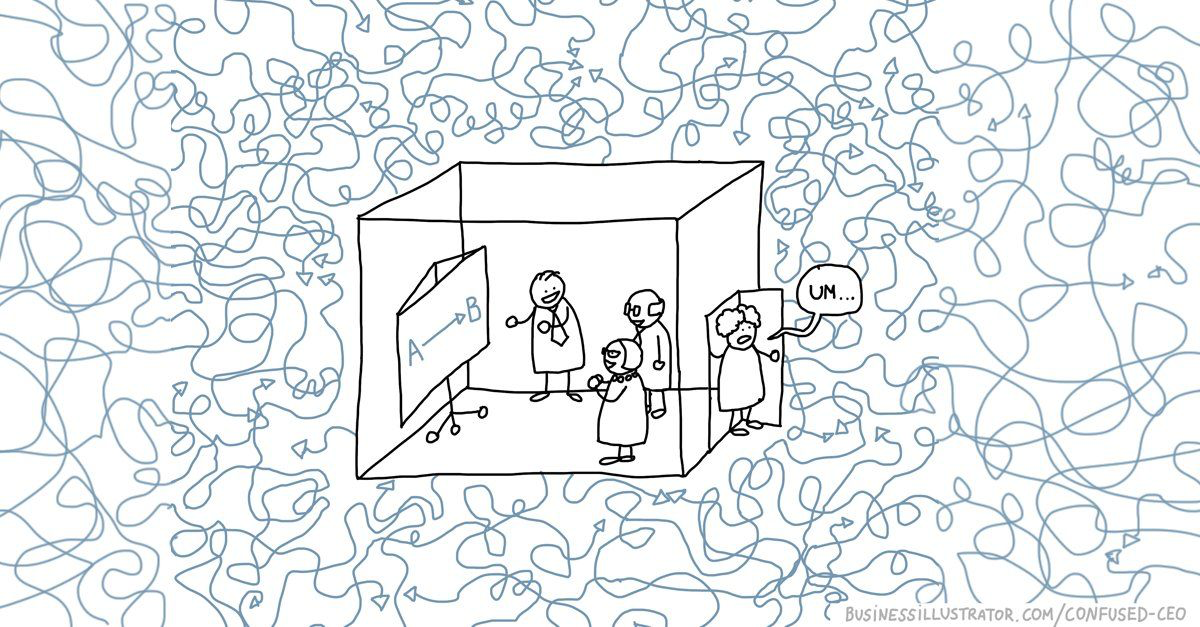 The first day was opened by the welcome message from the mayor of Valsamoggia Daniele Ruscigno who briefly reported his now long experience in the use of systemic approaches in his role as territorial administrator. Rather significant is his exhortation not to underestimate the practical and pragmatic scope of the systemic approach which, on the other hand, is often considered a little too abstract and impracticable in everyday life.

These two days of work had the aim of allowing a first access to the world of complex systems and to some useful tools for interacting with them, better understanding their nature, boundaries, characteristics.

We tried to do this through small direct experiences that involved the participants in first person. In the first simple exercise, participants were asked to provide drawn instructions on "how to make toast". This simple activity has allowed us to show how everyone tends to provide their own interpretation of reality and of the processes that lead to a certain result. In particular, the concept of border and area taken into consideration was evident. Someone has focused on the final act of roasting, someone has broadened the field of observation starting from the flour and arriving at the pleasure of tasting (more on this in our previous post).

After this first small exploration of the theme, we have moved on to observe how the systemic approach translates into institutional practice. A video summary of the ANZSOG panel Reimagining government was used for this purpose (the one above). From this conversation between experts we have tried to derive a series of aspects and principles that have been highlighted through special screenshots inserted in the original video to allow easier memorization of important concepts.

The last exercise of this first day was instead carried out using a game specially developed to allow participants to experience firsthand the difficulties encountered when trying to control a complex system.

The game platform allows you to interact with a certain number of elements trying to control their behavior. In a series of successive phases, elements are introduced which progressively help to understand the rules of the system with which one is interacting. The game helps to understand that through correct information and the right observation it is possible to achieve partial control of the system, but that obtaining complete control is practically impossible. It also shows that with increasing complexity (ie the number of elements that make up the system) it becomes very difficult to understand the global effects of an apparently simple and risk-free local gesture.

The game platform will remain available online in order to be able to repeat the experiment after the meeting, with colleagues or for educational purposes.  If you want to try it yourself, you can do it by following the instructions here.

After a summary of what happened on the previous day, the second day opened with the story of an application experience of the systemic approach in the Swedish city of Växjö. The over thirty-year journey of this city has profoundly inspired Valsamoggia in many of its choices from 2008 onwards. In particular, the idea of allocating the governance of a series of environmental and sustainability issues to a "place" external to political competition has also promoted the development of the Local Transformation Toolkit methodology.

After the gaming experience that brought out the need for tools for understanding and analyzing complex systems, we tried to use two of them.

The first is the framework Cynefin, already rapidly explored in previous encounters. This time we tried to use it for the analysis of some practical cases brought by the participants. Divided into groups, we tried to identify the characteristics of real actions in progress in the communities of origin, framing them through the classification of spaces provided by Cynefin.

From this short experiment emerges the unfamiliarity of the participants with this type of approach and the potential for qualitative improvement of the analysis of a project even through a relatively simple tool like this. We could conclude that there is a need for training and support to support the development of this type of skills in local governments, organizations, etc.

The final workshop focused on the use of causal diagrams, another very useful tool for the analysis of complex systems (although much more challenging). After summarizing some basic concepts and introducing the LOOPY platform that allows you to design and experiment with your own diagrams, we moved on to the analysis of a real case derived from the Valsamoggia experience.

It was a case of analysis of an initiative linked to the recycling of plastic which could appear to be a virtuous initiative, but which upon closer analysis presented various aspects of risk and the production of effects contrary to those imagined.

Also in this case the inexperience of the participants in the use of this type of analysis was evident. This does not only concern the idea of a direct use of tools of this kind, but also the awareness of their existence as a resource that could be implemented through the use of consultants in order to obtain an improvement in the planning of actions on the territory.

One consideration that emerges from these brief exercises is that there is probably a lack of opportunities to learn and practice these methodologies which could instead bring many benefits if combined with other more conventional and widespread approaches.

The LOOPY platform is however available free online and can be used by the participants also for the analysis of the topics that we will address in the next meetings of the MEET project.

ID: F67950766
This site uses only Technical Cookies, essential for the correct functioning of the website and to provide the service offered and requested by a user.